This work is licensed under a Creative Commons Attribution-NonCommercial 3.0 Unported License.

We’re dealing with contractors, and Roby feels our frustration.  Unfortunately, he often pulls too hard, and needs assistance to release his hair.

Here are some other pics from the last few weeks.

Roby is three and a half weeks old now, and we’re absolutely loving our new family.  We’ve had some homeowners’ drama, which will divert some of the money that was going to go into college funds for the kids into a remodeled bathroom.  We may install a desk in the bathroom, though, to enable efficient studying.

The Boy is eating, sleeping, and doing that other thing that babies do like a champ.  He gets fussy in the evenings, but is generally pretty easy to soothe.  We’re much more relaxed with him than we were with his didi at this age, and I think that at least some part of his agreeable behavior is attributable to our confidence.

It has been a challenge managing Kaya’s enthusiasm about her little brother.  She’s unquestionably positive about the whole endeavor, but a bit antsy about where she fits in.  She is also suffering from an extreme case of listenitis.  The most common refrain around our parts is: “Kaya.  Kaya.  Kaya.  KAYA!”

In the good moments, we get family cuddles and smiles:

In the less good moments, we get grand collisions of fussiness (hit play):

For the most part, though, she’s helpful, and we try to remember that she’s doing her best to adjust her expectations of just how much attention she can expect from her mommy and daddy.  She’s as assertive as ever; if I promised to play with her, and I’m trying to calm the Robester down, she’ll let me know that I made a promise and, dammit, we’re gonna have that game.  That’s good for her, good for us, and ultimately its good for Roby.

In childhood, many Bengalis take on two names that follow them through life. The bhalo nam, or “good name,” is the name that appears on legal documents.  The dak nam, or “nickname,” is used in more casual settings.

Roby’s sister, his mother, and his mother’s two sisters only have bhalo nams, perhaps because their names are so naturally cute that they’re totally dak-like.  Though “Roby” is similarly short and sweet, we have been rehearsing potential dak nams for the young ‘un.

Following are a few contenders.  And, forgive the scatological nature of some; the boy just doesn’t give us much to work with:

Any other suggestions?  In the meantime, here’s a bunch of recent pics:

Share in the cuteness as Roby gets his hair done and burps for the camera while Didi looks on from the other room.

Warning: this may not be of interest to those unrelated or unimpressed by the simple feats of a 1 week-old.

Last night was the first time since Kaya was an infant that I had that odd combination of utter exhaustion and existential satisfaction that many parents know well. The brain goes to interesting places when it’s part of a body that’s fast asleep yet is itself tuned into the frequency of a nearby child learning to breathe and process saliva and sleep and exist in this world. I was just as terrified in our first night at home with Roby as I was with Kaya, because his vulnerability is so utterly heartbreaking and he’s so completely dependent upon us. Yet I was also able to calm myself more quickly this time; all signs are that he’s a healthy baby, and they all gurgle and get restless. Intellectually, I know we’ll all settle into routine and learn to manage the exhaustion. I was and am prepared for how tired I’m going to get these next weeks and months. Last night as I lay in bed 4 hours after I went to sleep, having gotten all of about 20 minutes, I smiled to myself at how beautifully tired I was. Only days from now, or perhaps tonight, the beauty will fade away and there’ll only be exhaustion. But last night I was surfing on the tension between wanting, needing to sleep so badly, and yet needing even more to bear witness to my boy’s first night in our home. It was one of the best feelings I’ve ever had.

Today, we welcomed Roby Saha Waltzer into our family.  He arrived at 8:07 pm, weighing in at a solid 7 lbs 12 oz, and stretching a full twenty inches.

The name “Roby” (pronounced “Row-bee”) is derived from the Bangla pronunciation of Ravi, which means “sun.”  We settled on it because of its compatibility with his didi’s name (”Kaya and Roby” seemed to us to naturally roll off the tongue), and because it feels both familiar and unique at once. It’s also close to the name “Ruby,” who was a cherished member of the Waltzer family (my grandfather’s brother, and Kaya’s cousin Jasper’s great-grandfather). We had some disagreement over the way it would be spelled– momma wanted an “i” while daddy wanted a “y.”  Ultimately, momma relented, agreeing to spell it any way I wanted… although when I suggested we spell it “H-a-n-k,” she pulled that offer off the table.

Needless to say, we’re ecstatic, and looking forward to the challenge of managing and raising DushtuThey instead of Dushtumay.

Here’s some of The Boy’s first photos:

Paula’s now at the stage on her pregnancy calendar where it’s advising us about buying car seats and picking out outfits in which to bring the baby home.  Meaning, the baby is just fattening up at this point.  She’ll be full term in a week and a half.

Excuse me, I have to go put the crib together.  In the meantime, 1 year old Kaya just about sums it up:

Last night we attended a mixer for new families at the elementary school where Kaya will begin her march from kindergarten to the Supreme Court this September (though it still remains to be seen whether she’ll be there on the bench or as the subject of some sort of appeal).

She’s now at an age that I vividly remember, and attending her dance recital last month made clear to me that watching Kaya proceed through her childhood will be accompanied by memories of my own.  I’ve thought much about that dance recital over the past few weeks.  It provoked in me an odd mixture of emotions with which I’ve yet to adequately come to grips– I was so proud that she was performing something she worked hard on for months, and impressed by the level of support the community was showing for these girls who strutted their stuff confidently across the stage.  At the same time, I was horrified by the sexualization of pre-pubescent girls evident in many of the performances, and bothered by what I saw as an emphasis on showiness and performance rather than on craft and enjoyment.  While the event was pleasant on the whole, there was simply no need for the expensive, ornate costumes sported by each group.  I know, I know… they’re just kids, let them have their fun.  But that’s my point.  I feel that the dance would have been much more meaningful and perhaps even more fun with a dozen girls in black leotards stripped of the myriad cultural references that signified to the audience so much adorable cuteness.  The kids are naturally adorably cute without all that stuff… shed it and let them show what they’ve learned, for crying out loud!  Of course… I couldn’t have been prouder of Kaya, and tears streamed down my cheeks throughout her entire performance.

Another component of the recital that bothered me was that such a high percentage of the kids were white.  This is nothing against you, my potential white reader, and certainly nothing against white kids, but rather a byproduct of my strong preference for diverse communal experiences.  The mixer last night was majority minority, which was surprising because the state statistics show that the school is 80%+ white.  P and I remembered that there had also been a mixer in the morning, and thought maybe most of the white families had attended that rather than the evening event?   Who knows.  Maybe white people are less likely to let their kids stay up that late. 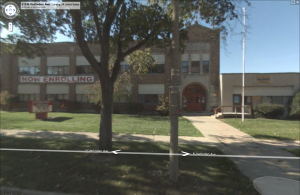 The school serves close to 600 students from pre-K to 2nd grade, and was impressive… art and music rooms support vibrant programs, a new playground was just completed for the pre-k and kindergartners, and the library even had a half dozen iMacs.  My elementary school had none of these things (well, we did have a great new playground, which Mrs. Waltzer helped put together, even if she wouldn’t allow me to go on the monkey bars), but I loved it then and remember it fondly now because of the kinds of people I was exposed to as a Verlinden Little Red (school pictured at left).  I had some good teachers and developed academic skills; but more importantly, I was exposed to a variety of types of kids and families and ways of looking at the world, which shaped me just as much as learning how to read or add and subtract.

Kaya’s about to become a Bulldog (the mascot of her elementary school), and I hope, hope, hope that when she looks back upon her own elementary school experience as an adult she feels its lasting impact as deeply and fondly as I feel mine.  She did turn to me after we toured the school last night and said “this looks like it’s a fun school, dad!”

Over the past two years Kaya has gotten ahold of our digital camera on several occasions.  The photos below offer a glimpse into the world as seen by a precocious four year-old.

At times her perspective is blurry, but she sure does get smiles…